One from the Heart: A Discussion 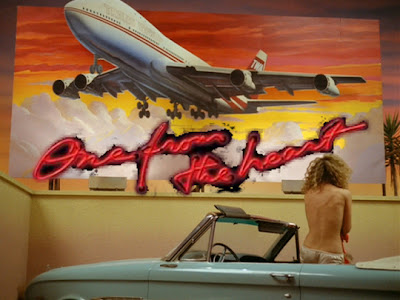 This is part of Culture Snob's Misunderstood Movie Blog-a-Thon. Hopefully there is plenty of discussion over there that will shine a new light onto old (or, new) movies. I am just kind of writing this off-the-cuff. No real preperation at all. So that's why it probably seems a bit chaotic and shambolic and no at all thought out. Just, whatever. Learn how to deal. If Mandy Moore can do it, then so can you. :) 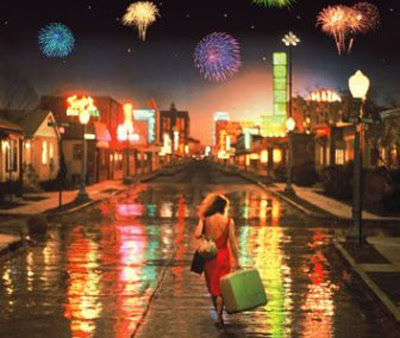 I have chosen to discuss Francis Ford Coppola's infamous 1982 film One from the Heart. If you are unaware of Coppola's grand debacle in experimental filmmaking then I can't really blame you. A notorious flop upon release in 1982, the film single-handedly plunged Coppola and his Zoetrope producion company into debt - a debt that he spent the better part of two decades trying to repay by being a director-for-hire on films such as The Rainmaker and Jack. It was almost universally reviled by critics and audiences alike (the few who actually went and saw it on the big screen that is) and subsequently grew the tag of being one of Hollywood's biggest follies. 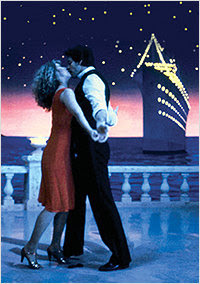 Personally, One from the Heart is one of my very favourite movies of all time. I'm not entirely sure I can explain why I like this movie over Coppola's other pet projects such as The Godfather (all parts) or Apocalypse Now. I just do. I do know that one of the reasons that I get a weird sense of glee while watching it is the ever-encompassing sense of artificiality that, for many (understandably), drowns the film.

And that is where I think it becomes misunderstood. Critics and audiences went in expecting a certain thing and when the film confounded them they just dismissed it. I'm not sure if there has ever been a more perfect example of a film being both ahead of it's time and incredibly old-fashioned. Let's discuss. 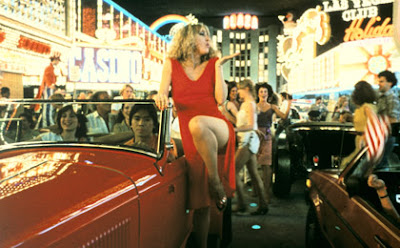 In my eyes, one of the key aspects of One from the Heart is it's pure desire to adhere to old-school filmmaking techniques. Particularly MGM musicals. The reason that the film put Coppola into bankruptsy was because he desired to make his film on the Zoetrope film studios. And for a film set entirely in Las Vegas, that presents a challenge. The solution to this challenge was to recreate a full size replica of Las Vegas in the studio. Sound's absurd right? Well, he didn't recreate the ENTIRE Las Vegas. Obviously there is heavy use of models and matte work, which were of prominent use in musicals from the onset of the genre. Many movies in the genre have a primary set and you can see the edges and the painted backdrops. I don't see why here is any different. 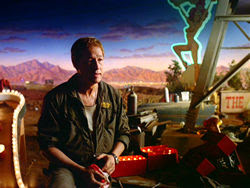 There are scenes set on the streets of downtown Las Vegas where you can actually see the ceiling of the studio! Several scenes set at the edge of town are quite obviously filmed at the very edge of the studio with the backdrop painted on. This just adds to the effect that what we are watching is completely artificial. It's not real. Which is, I assume, what people didn't like about the movie. Why watch something that is eminently false? For some genres like science-fiction or action it works because you're dealing with hyper-reality, a world that we can associate with but know in our brain that it is all make believe. Whereas in One from the Heart we're being given a "romance" movie of sorts and some couldn't marry the mixture of these real people having emotion-wringing fights on a backdrop made from plaster and paint. It's silly, but nevertheless. 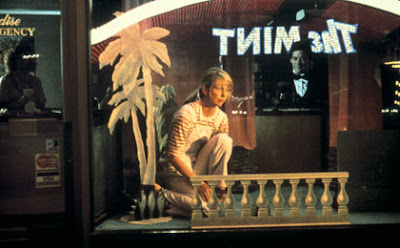 Add to all that the cinematography by legendary Vittorio Storaro and Ronald Victor Garcia, which bathes the film in technicolour neons and the film's, for me, centrepiece - the unabashedly old-fashioned musical sequence that starts as a mere tango and then descends into an all-in dance fest on the main street of Las Vegas. There's even singing. This old-fashioned break in tradition was just not common in the '80s. The most recent musicals were, what? Xanadu? It's the same reason, I believe, that Martin Scorsese's New York, New York failed. People were just not ready for an old-fashioned musical (or any musical) on the screen. 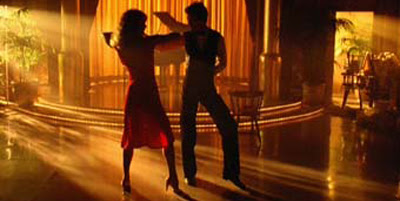 But presenting an old-fashioned musical on the screen is one thing, but when Coppola mixed it with one of the most strange filming shoots in history, he was just begging for trouble. Not only did Coppola cast incredibly unglamourous lead roles (Frederick Forrest and Teri Garr don't exactly encapsulate the MGM spirit, do they?) but then he had to go and try and pioneer an altogether new way to make movies. One that in this day and age is common place, but back in the early '80s was seen as playing God. Coppola didn't even seem to set foot on the soundstage, instead choosing to use a live video feed from which he viewed the goings on from his own home, a process that is now routinely used for second, third and fourth units on film sets and in various other assorted filming conditions.

The gossip coming out of the set (I presume that was one major side effect of the process) was that Coppola didn't know what he was doing and that he didn't have a handle on the set and the going ons of his employees. 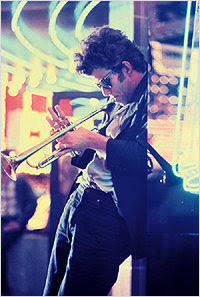 Another major force behind the film was the soundtrack by Tom Waits, featuring Crystal Gayle. Where would television be these days (think Grey's Anatomy and The OC) without the good ol' song score. One from the Heart uses a collection of songs to mirror the action that's happening on screen, as opposed to traditional musical sequences that you would expect to help the audience understand how a character is feeling. It works incredibly well, and was probably one of the one aspects of the film that was hailed upon release. Waits was even nominated for Academy Award.

When viewing a film like One from the Heart I think it's important to view it in a certain light. Look at it as a grand experiment. You may not enjoy it, and that's your own prerogative, but you may come away thinking that Francis Ford Coppola is like the old crazy scientist who has a theory but nobody believes him, only to be proven right by film's end. His film has flaws, I admit that as will any of the film's die hard fans, but it's dedication to itself paves over a few of those cracks. 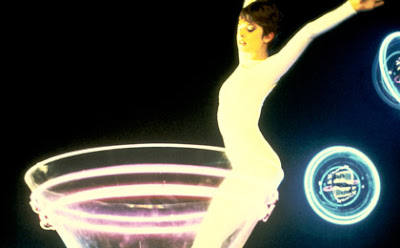 I've read countless reviews of the latest indie sensation film who praise it purely because it's different and not the same thing that we've seen before. I like to imagine that the end result was just an unfortunate product of it's time. It really was like nothing nobody expected. Nobody expected Coppola to make an old-fashioned stylised quasi-musical. And neither were they expecting Coppola to create a near brand new way of making movies. People just didn't understand what Coppola was trying to be by mixing the old with the new. He was essentially trying to bridge the gap between older filmmaking techniques and those of the future, all while presenting a film that would have confounded expectations with or without the art direction or the filming techniques - what with it's bickering 'plain looking' people having affairs. I guess they wanted more mafia bosses and war-torn jungles.

To quote the film's own tagline "When Francis Ford Coppola Makes A Love Story... Don't Expect Hearts And Flowers." 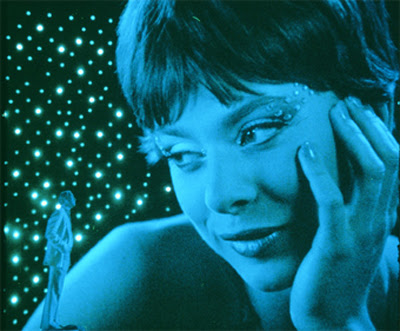 Labels: Directors, Francis Ford Coppola, Music, One from the Heart

I have never seen this, but the pictures make it look fantastic. It's understanding that Coppola tried to make a traditional studio movie. It's obvious that he is fascinated with movie magic. I think of Tucker and there's a scene where they do a clever transition in the movie and there's actually a pixie dust sound effect in there as if to say "you just witnessed movie magic. Isn't that something."

The story of the film doesn't lend itself to this sort of lavish old-fashioned take, and that's where people took a wrong turn with it I think. Coppola was trying to mix a sort of traditional emotional story between a fighting couple. But he set it in Las Vegas and decided to stick this story into this big overdone and overthetop neon-dripping bizarro musical.

I think Coppola wanted to do that. I mean, watching a lot of those domestic-set movies (I'm thinking Kramer vs Kramer and Ordinary People> from 79 and 80 respectively) is incredibly dreary. All washed plain looking (that goes with the time period I guess) and what better period to brighten it up with than old-school musicals and backlot-produced films? His characters are still miserable ol' sods though.

People weren't used to it and thus deemed it terrible. And, yes, today the combination still errs people the wrong way, but today's audiences can be more favourable to these wild auteurist vehicles.

...but then again, that hasn't stopped Southland Tales from being murdered.

First of all, thanks for contributing to the blog-a-thon.

Second, Jack is the work of a visionary cinematic genius. It's Robin Williams as a little kid! We hadn't seen anything like that since Big!

Anyway, I had planned on writing about Tucker as part of the blog-a-thon, but I think you've touched on a lot of the themes I wanted to hit — particularly the use of an anachronistic filmmaking style.

Glenn Dunks
Melbourne, Victoria, Australia
Glenn is a twentysomething freelance writer from Melbourne, Australia. Apart from this blog he is the film editor for Onya Magazine and writes regularly for Trespass Magazine. His work has appeared in The Big Issue, Encore Magazine, Forte Magazine, The Film Experience Blog and was the film correspondent for The Outland Institute radio program on JOY 94.4.

Stale Popcorn, noun, 1. A veritable cornucopia of movie geekdom, celebrity worship, Australian film discussion and all with occasional musical interludes! All wrapped up in the salty buttery taste of movie popcorn that's been sitting in the box for too long. What's not to love?

Cinema of the Absurd

Websites of the Neverworld

Everything that is written on this webpage - Stale Popcorn and any tangents from it - is written by me, Glenn Dunks, unless otherwise stated. It is appreciated that if you wish to reproduce any of that you do so with an appropriate link (please do not copy it all because that gives your reader no reason to come by here and possibly increase my traffic).

If any pictures or music files are posted on Stale Popcorn that are owned by you and wish to be credited for or have removed please feel free to send me an email using one of the addresses at the top of the page. I will gladly oblige.